Led by sportswear titans Adidas and environmental organization Parley for the Oceans have collaborated to create a recycled-plastic tennis court, it is roughly 10km off the Far North’s coast at the largest coral reef ecosystem on planet earth.

As the Australian Open begins to take over Melbourne CBD scenery, this full-sized court on the water is intended to promote Adidas’ latest range of apparel, which incorporates recycled plastic.

It was debuted on the floating tennis court, which was placed in the Great Barrier Reef – the world’s largest coral reef system – to draw attention to the wider issue of plastic waste. Considering its iconography in regard to climate change, it seems befitting that Parley and Adidas chose the Great Barrier Reef as the place for their recycled tennis court to float above. Posted atop a barge that makes routine passages across the reef for environmental marine construction projects, the recycled tennis court hosted a few matches between some of Australia’s biggest tennis stars. Following the matches, Parley and Adidas bestowed the tennis court to a local Townsville school.

“The new Adidas tennis vesture collection, that will be worn by players during the Australian Open in Melbourne, has been inspired by the beauty of the Great Barrier Reef and consists of products from one of our sustainability innovators, made with Parley Ocean Plastic,” said an Adidas spokesperson.

“We have chosen to launch this collection in the heritage-protected Queensland marine park to raise awareness and positive discussion around how we can help end plastic waste and protect the Great Barrier Reef.” 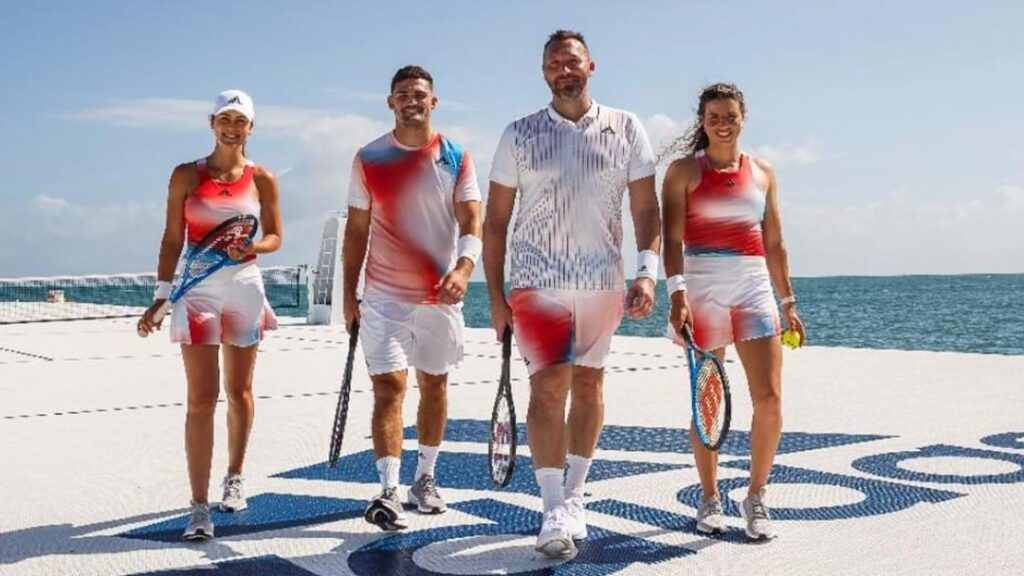 To mark the launch, Australian sports stars swimmer Ian Thorpe, canoeist Jess Fox and rugby league player Nathan Cleary, along with model Steph Claire Smith, played a game of mixed doubles on the court. Adidas stated that all balls were recaptured from the water.

In addition to raising awareness, Adidas announced they will remove all products containing virgin polyester by 2024 – with the goal of having a range of sustainable designs in future years.